Thus continues my reaction to Forbes Watson’s eloquence on the godhead of Robert Henri.  I trust that because Watson was a contemporary of Henri, he had a closer understanding of the man’s greatness.  The editor of The Art Spirit must have thought so, to choose the eminent art critic to write the forward of my 1939 J. P. Lippincott edition.  But could Watson put his finger on the mystique or the fascination?  See if you can read between the lines to solve the elusive mystery of Art…

To be sure Chase talked to his students about El Greco before Henri started teaching, and other painters of Chase’s generation knew these things.  But Henri was a far more dynamic teacher than Chase.  It required his extraordinary personal magnetism, his fervor, his passion for the verbal communication of his ideas to place before a vast succession of eager youth the new world of vision and to make general knowledge which before had been too special to be effective.  No one who has not felt the magnetic power of Henri, when he had before him an audience of ambitious students hungry for the master’s moving words, can appreciate the emotional devotion to art which he could inspire as could no other teacher.  One had to know those students to realize how it could have been possible at that late date for a young painter to combine genuine painting eagerness with a sublime ignorance of the whole world of art that had its being outside of the Henri class.  This ignorance in many of his students Henri set himself to overcome by opening their eyes to the fundamental meaning of art.  But he did not hold up to them the art of the past or the great contemporary art of France as an ideal to imitate.

One can hardly believe now, were the facts not so easy to establish, that many of the young men and women who studied under him, although so passionately interested in painting, first heard the names of Daumier, Manet, Degas, Goya and a host of others from the lips of Robert Henri.  One wonders how some of them ever came to painting at all after exhibiting such surprising ability to dodge knowledge.  Henri was not on the lookout for cultivation.  Native talent, in whatever crude disguise it might appear, was what he sought.  Let the untrained student be a naïve, as profoundly illiterate, as filled with aesthetic misconceptions as possible, Henri disregarded the outward dress and pointed lack of polish.  He looked to the man’s potentialities, which he attempted to develop without regard to himself in time and energy.  He demanded from his students a first hand emotion received not from art but from life.

Not only could Henri adapt his knowledge to the craft, he had the wisdom to recognize and cultivate this seed of life in others.  Watson gives a rather righteous attitude against the poor, ignorant student, which indicates a lack of understanding of Henri’s true battle.  He’s right to say that Henri disregarded the outward dress and lack of polish.  The essential element was ‘potentiality.’  Henri could discern the condition of the spirit.  Any of us can when we learn to see beyond our culture.  How well do you conform to your surroundings?  How thoroughly have you assimilated to your world?  Trying to stay in line, or aggressively fighting against the tide will kill any spirit over time.  For most of us, learning to ‘behave’ gradually lulls the spirit into a deep sleep, more effectively than any wicked old witch’s spell.  The spirit of life sees its surroundings and flows through the narrow passage without drying up or tumbling down.  This is the message in the work Daumier, Manet, Degas, Goya and the host of others, and this is what Robert Henri sought to train into the lives of his disciples.

When Henri’s classes were at fever heat, impressionism was already being taught in the Pennsylvania Academy.  Twatchman, who died in 1903, had inculcated impressionistic theories of light in his students at the The Art Students’ League.  But Twatchman was an unwilling, comparatively inarticulate teacher, capable of communicating only to the few some sense of his rare and subtle spirit.  Henri, on the other hand was, as I have said, an inspired teacher, with an extraordinary gift for verbal communication.

Henri never showed the slightest interest in the more scientific side of impressionism.  The blond beauties of sunlit landscapes had no special appeal for him.  What he did take from the impressionists and what, after all, was perhaps the most valuable contribution made by the group, the only contribution which they all made in common, was the idea of looking at contemporary life and contemporary scenes with a fresh, unprejudiced, unacademic eye.

His students followed Henri without complaint even when they suffered thereby great material hardships.  They did not make the slightest compromise with the ideals which Henri held before them.  I can still remember sitting on a bench in Union Square listening to some Henri students in a heated discussion of what Henri had said that evening to his Night School students.  The discussion was so ardent that no one hearing it could have believed that these young men, who had worked all day at manual labor, and painted for hours at the Henri School, were about to sleep on a bench in a park because they could not afford to hire a room for the night.

It’s all about light and life!  We nurture or starve the spirit by what we feed it.  That has always been true, and since the beginning of time, most of mankind is starving at the banquet table.  The difficulties surrounding the care of our physical bodies are enough to distract any but the most determined and persistent individual.

What’s your state of spiritual health today?  Are you nurturing your spirit or starving it to death?  Is it your habit to complain, criticize and condemn, or to develop consistency, commitment and courage?  Can you catch those mental messages before it’s too late?  What actions come from the ‘food’ of your thoughts? 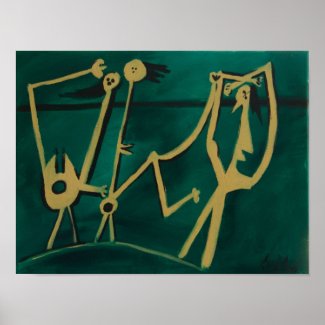