The More Things Change, the More They Stay the Same: Endless Art

‹‹ Plus ça change, plus c’est la meme chose›› evidently, that’s from Jean-Baptiste Alphonse Karr in the January 1849 issue of his journal Les Guêpes (“The Wasps”), and boïe lemmie tell ya!  It seems that part of the timelessness of Robert Henri’s The Art Spirit comes from the unchanging nature of mankind.  We’re running in circles to find the answers, while the evidence is right in front of our faces!  Forbes Watson’s enlightened forward to my 1939 edition of the book continues:

Curiously, Although William Chase and other prominent American painters and painting teachers, who belonged to the period immediately preceding Henri’s reign, might have brought back from Europe for their future pupils the fresh news of Manet, Degas and the others, it remained for Henri, the great protagonist of a new American school, to be the first prophet to bring to students in any great numbers, both a sense of the importance of the last half of the nineteenth century in French painting and a knowledge of the revived interest in such old masters as Frans Hals, Goya and El Greco.

Had Watson forgotten the mid-19th century shift of art study through apprenticeship and into the classroom?  The advance in technology suddenly increased the speed of life.   Industrial manufacture called for industrial education.  New opportunity required new methods, and centuries-old traditions of mentoring and discipleship became training programs and certifications.

Additionally, the young American nation hardly perceived their need for decorative art in those early days.  Form and function were primarily utilitarian.  The artistic craftsman’s skills found their employment in architecture and furnishings, rather than decoration.  Very few American artists of that period would have met the requirements of the wealthy that desired portraits and other ostentatious displays of their stature. Watson may rail against Henri’s predecessors for neglecting the history of art, but those were different interests for different times.  Look at any mid-19th century American town hall and ask yourself what other style would’ve suited that budding empire?  (And for this, Hollywood is extremely grateful; otherwise how could they keep after all those varied stage sets?)

Obviously, Henri was at the right place at the right time, as is each of us.  The great difference was that Henri knew how to observe and apply in order to advance.  Someone who’s truly in touch with past, present and future, and takes positive action on his experience will undoubtedly attract attention.

Who, in the whole history of mankind, strikes you as truly fascinating?  Whether they uphold the rules or break them, identify the element that sets them apart from the crowd.  What can you emulate in their actions?  Please comment, because I’d sure like to know! 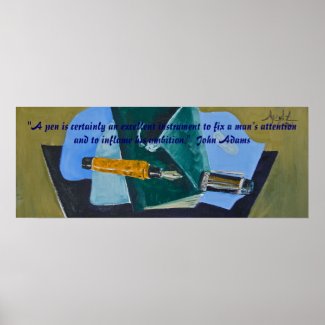 Mightier Than the Sword by AprylZA
Browse Oil Posters